Connect your 15Khz arcade cabinet monitor to your PC with NO special configuration in either boot screens or Windows. You can also connect an ordinary PC monitor and get all the resolutions of the 15Khz monitor plus conventional higher Windows resolutions.

* Displays all boot and Windows screens on the arcade monitor and/or PC monitor. Displays Windows desktop in a choice of resolutions including interlaced and non-interlaced.
* Connect an ordinary PC monitor, or an arcade monitor, or both at the same time in extended desktop mode.
* Allows command-line MAME or GUI MAME to run almost all games at their native resolutions without hardware stretching, scan converters or other degradation.
* Native game resolutions are available on both the arcade and the PC monitor (See note below regarding PC monitor limitations).
* Closely emulates the original game board's graphics hardware.
* Contains 28 built-in 15Khz video graphics modes tailored specially for emulation. All of these modes also available on a PC monitor.
* Supports 25Khz modes as well, on multi-frequency monitors such as the WG D9800.
* All 240-line modes have an exact 60Hz vertical refresh rate for best performance in scrolling games.
* Special 400 X 256 Mode timed at 53Hz vertical for games such as Mortal Kombat.
* When used with arcade monitor, all video modes timed at 15.7 Khz horizontal frequency to eliminate picture shifting on mode changes.
* Also contains all standard VGA graphics and text modes, running at15Khz. On arcade monitors. text screens display the full 25 lines without interlace using a special reduced-height font.
* All special modes available in Windows XP, Windows 7, Windows 8 and 10 at all colour depths.
* Desktop rotation supported in Windows for vertically-mounted monitors.
* Choice of Windows desktop resolutions including interlaced and non-interlaced modes. Can be assigned hot-keys.
* Run any Windows application which can use 640x480 or 800x600 on your arcade monitor including 3D games.
* On PC monitors, all the native game resolutions are available, plus conventional Windows resolutions.
* All modes locked with vertical and horizontal negative sync for easy connection via a direct cable.
* Choice of available connection methods, Via J-PAC, Via Video Amp, or Direct Cable connect.
* Get the best from your D9800 or other multi-frequency monitor. The ArcadeVGA card will run the low frequency modes which these monitors can handle, as well as the higher VGA modes.

PC Monitor Information:
This card gives the greatest benefit when used with CRT monitors and is not intended for running power-hungry games at very high PC monitor resolutions. Its important to note that LCD monitors will not give a picture which is identical to an original CRT monitor as the picture resolution will be superimposed on that of the actual LCD panel. So, what exactly is the difference in quality when using a PC monitor between the Arcade VGA running at the native resolution and an ordinary card running Direct 3D stretching?

The difference actually depends on what types of games you play. The most striking improvement is with older, classic games which have "graphics ROM" type character sprites such as Galaga, Pacman, Space Invaders and the like. The difference is clear.

Pictorial graphics of later games show an improvement in sharpness with no loss of detail, giving a picture where you can see each individual pixel of the original. On this typeof game it is a matter of taste as to whether you prefer this level of sharpness against a Direct3D picture which slightly blurs and softens the edges. 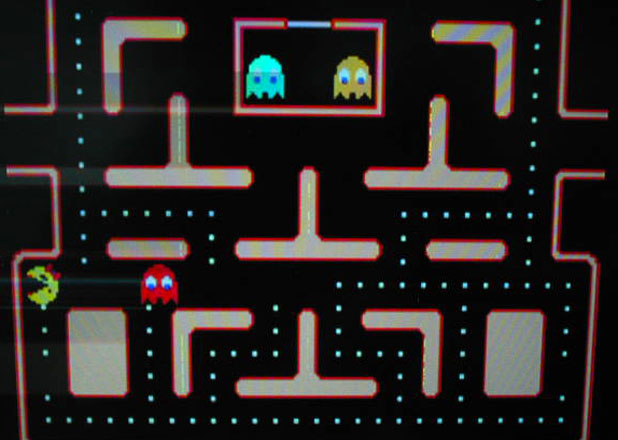 This picture shows the same game with a fixed resolution of 352 X 288. No stretch nor Direct3D 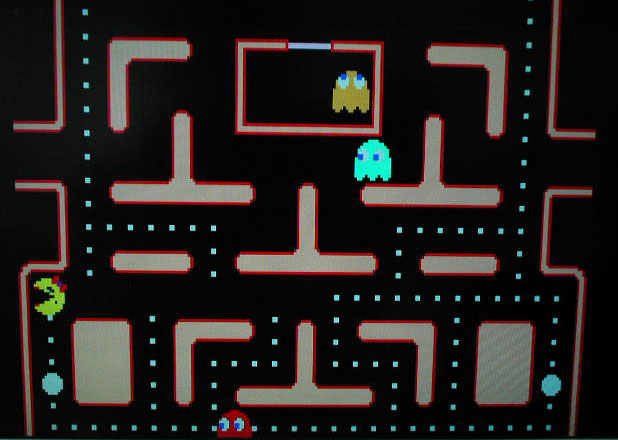 This joystick is ideal for arcade machine and JAMMA machine projects. It is a good low-cost alternat

Connect a PC to a JAMMA cabinet in seconds!The JPAC (JAMMA interface for PC to Arcade Cont

IMPORTANT: The amp is designed to be connected to a VGA card which outputs 5 volts on pin 9 of the V

The CGA/EGA/YUV to VGA converter board will allow all types of RGB, EGA, VGA or YUV component signal

This 19"LCD open frame monitor is a high quality LCD screen for your arcade game machine. Ideal for

412-In-1 Vertical JAMMA Game Board

The 412 in 1 JAMMA board features a great selection of arcade classic games, including Astro Blaster